The movie starts with a young boy named D´Artagnan witnessing an evil man in black named Febre murdering his parents in cold blood. The murderer is the main henchman of the powerful Cardinal Richelieu. Once the little boy´s father is killed, he defends himself with his dad´s sword, injuring Febre’s face and blinding him in one eye. Long-time family friend Planchet takes D´Artagnan with him, saving his life. Planchet himself had once been a musketeer, a member of the devoted squad protecting King Louis XIII.

The movie jumps in time and finds a grown D´Artagnan who reaches Paris to find out that the Musketeers he wishes to join have been disbanded by the express command of the Cardinal Richelieu. The cardinal and Febre plan to take authority from the king´s hands and provoke hostilities among England, Spain, and France, so they can grow politically. 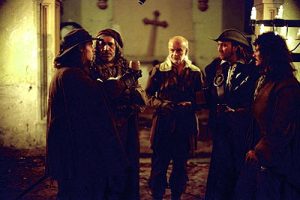 The musketeer group in a meeting.

Young D´Artagnan joins forces with Athos and Porthos, two former Musketeers who have remained loyal to the king. He talks them into setting the head of all Musketeers, Treville, free from his imprisonment. During his stay in Paris, D´Artagnan has a crush on Francesca, the palace´s chambermaid. She is the daughter of the queen´s seamstress.

A mob, reunited by Febre under strict orders from Cardinal Richelieu, attacks the Royal Palace at the same time that an English dignitary, Lord Buckingham, is visiting. D´Artagnan and fellow Musketeers Athos and Porthos manage to rescue King Louis, his wife, the queen and Lord Buckingham. The only way to preserve peace between the nations is to celebrate a clandestine meeting between the queen and Lord Buckingham at the north coast. There are plans for the queen to be guarded by D´Artagnan, but the landlord of the place the young man is staying at overhears this information and goes to Febre with it.

The trip turns into one giant ambush; D´Artagnan has to prove his skills and bravery along the journey in a variety of places against all of Febre´s men. The only moment he lowers his guard is to become intimate with Francesca. Seizing the opportunity, Febre discovers both and kidnaps not only Francesca but also the queen. A fake letter that the queen is forced to write and send with her own ring convinces Lord Buckingham to meet her at a castle, a set-up orchestrated by Febre.

The one-time mastermind behind the plan, Richelieu, realizes that Febre´s ambitions are going way further than what he intended to cause and that if the war actually starts between France, England and Spain, the results would be catastrophic for his country. He visits D´Artagnan secretly to warn him about what could happen and to help him stop Febre before it´s too late. The young hero agrees to join forces with the evil cardinal, if only because his beloved Francesca is being held captive too.

After returning to Paris, D´Artagnan talks his fellow Musketeers into following him to protect the crown from the evil Febre. An army is put together to rescue the captives and they charge the castle on horseback. They lose a small number of men but the distraction they create allows good old Planchet to place his vehicle beyond the fire of the castle´s cannons and blow the gates.

D´Artagnan engages Febre in an epic sword fight, with great skill demonstrated on both sides, while the rest of the Musketeers take on the cardinal’s guards. The swordfight ends with the young hero as the winner, killing Febre and avenging his parents´ death. The movie ends with medals for the Musketeers and the marriage of D´Artagnan and his beloved Francesca.

It´s safe to say they lived happily ever after. 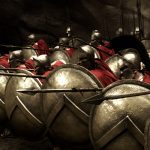